My idea for an MTV or Spike TV "reality" show...

"Pick-ups". We collect the worst pick-up lines ever, get a video camera and then go to a bar and record peoples reactions to the pick-up lines.

Okay, it's probably not enough for a whole series, but it would be amusing. We did this a couple times in College while our targets must have thought we were idiots, the the responses we got were pretty funny. I remember one friend mixed things up a bit by showing up in a Chewbacca costume.

Seriously, what would your response be if someone in Chewbacca costume asked you if you wanted to ride his millennium falcon, and when you walked away yelled after you, "aw... come on, don't leave me Han Solo." 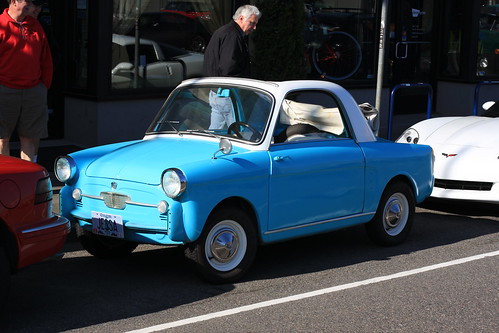 I'm having a devil of a time trying to id this car. The logo on the hood looks like an "AB" or an "A8". Anyone know of a good vintage car logo identification site?